SAMUEL BASS: THE BACK STORY BY HISTORIAN DAVID FISKE 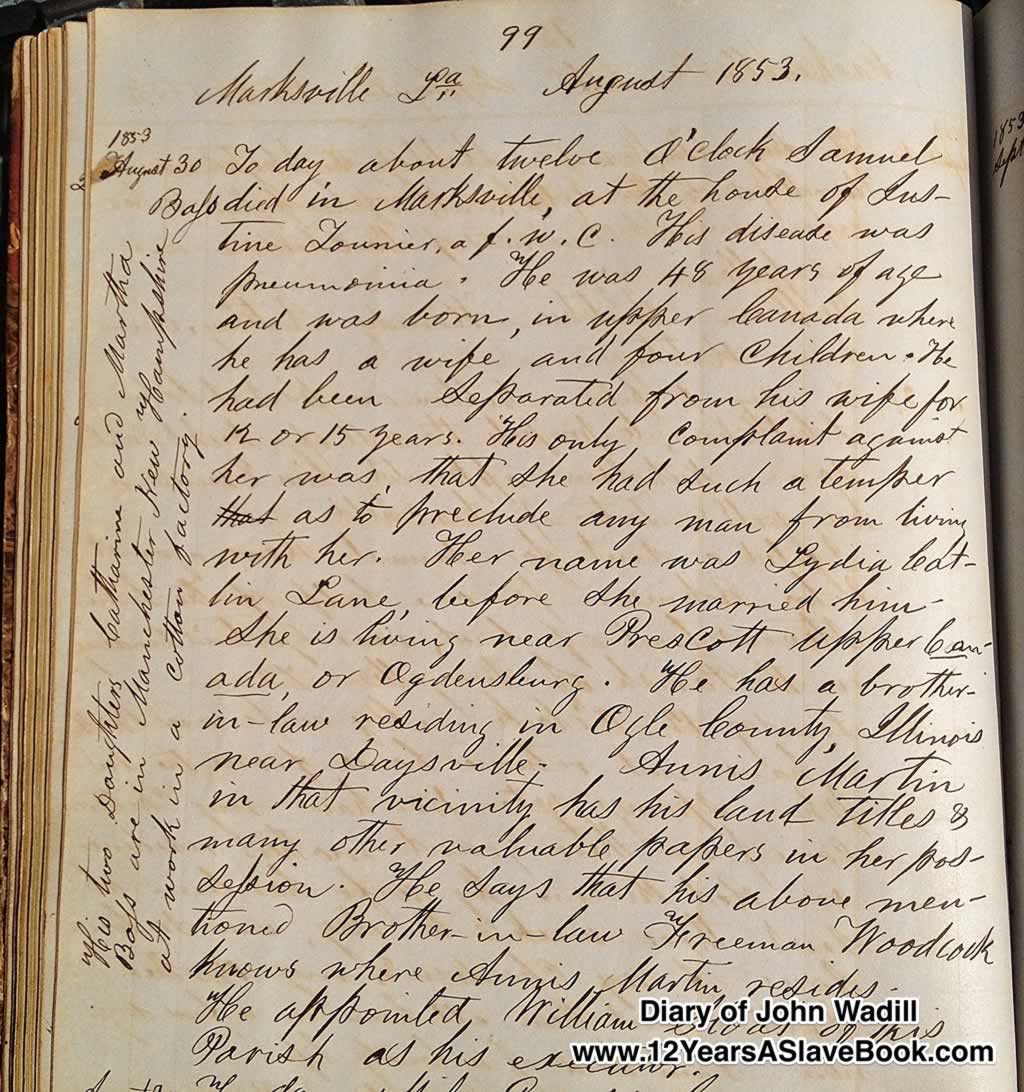 By David Fiske, co-author of Solomon Northup: The Complete Story of the Author of Twelve Years a Slave (Praeger/ABC-CLIO, 2013)

In the summer of 1807, two babies were born–in towns only about 135 miles distant–whose lives would intermingle in a very unusual way: 45 years later, one (a Canadian) would help get the other released from slavery in the American southern state of Louisiana. This fall, a major motion picture–12 Years A Slave–will tell the story on screen.

Solomon Northup (the man who would be rescued) was born in a small settlement in Essex County in New York State on July 10, 1807 (though his autobiography gives his year of birth as 1808, other, more reliable, evidence indicates it was actually 1807). His father Mintus, a former slave, had been emancipated in 1798, and his mother had never been a slave. He therefore was born a free man (at a time when slavery still existed in New York).

Samuel Bass (who would later be one of Northup’s rescuers) was born a few weeks later, on August 5, in Augusta, Ontario. His grandfather, Dr. Adonijah Bass, had been a Loyalist during the American Revolution. Though Adonijah remained in the United States after the war’s conclusion, his family later emigrated to Upper Canada, to the Prescott area.

In an intriguing historical “near miss,” the fathers of Samuel Bass and Solomon Northup nearly became neighbors. Mintus Northup had been a slave to Capt. Henry Northup, also a Loyalist, who moved from coastal Rhode Island to Hoosick, in New York, about 1790. Mintus had come along with his master, living in that town until at least 1798, when Capt. Northup manumitted him as a provision of his will.

If the Northups had moved to Hoosick a year or two earlier, they might have had an opportunity to meet the Bass family (including Samuel’s father, John), who had lived in a town called Walloomsac, near Hoosick, before their removal to Canada around 1788/89. Had they resided that near each other, the two Loyalist families (including the fathers of our two subjects) would probably have become acquainted.

Solomon Northup, after marrying and fathering three children, moved to Saratoga Springs, New York. It was there, in 1841, that two men lured him to the American South with offers of employment. But they sold Northup to a slave trader, and he spent about the next twelve years living the life of a slave, serving several different masters in the bayous of Louisiana. Even his identity was taken away from him–he was given the name Platt.

In 1852, Bass was doing some carpentry work for Northup’s owner, Edwin Epps. Northup, as a slave, was assisting him. Working side-by-side, the two men got to know each other. Northup had overheard conversations suggesting that Bass was against slavery, and decided to confide in him.

He put to Bass the following question: “I want to ask you what part of the country you came from?” When Bass responded that he was from Canada, he was surprised when Northup explained “I have been there. I have been in Montreal and Kingston, and Queenston.” Bass realized Northup had indeed visited Canada, and asked how he had come to be a slave in Louisiana.

“Master Bass,” Northup answered, “if justice had been done, I never would have been here.” He then related the whole ugly story of his kidnapping and enslavement. At its conclusion, Bass determined that he would help Northup, by writing letters on his behalf to people back in New York. It was one of those letters that resulted in Northup’s release from servitude, early in 1853.

If the letters not been successful, Bass was prepared to go a step further; he told Northup that he would go to New York State himself, in order to find someone who could assist. Bass was determined to help Northup get released from his enslavement!

A free man again, Northup rejoined his family, and soon authored a book, Twelve Years a Slave (the basis of the current movie) and traveled around giving anti-slavery lectures. He later also provided aid to fugitive slaves, helping them find refuge in Canada.

Newspapers reported appearances that Northup made, and the last such report (that has been located to date) involved a planned speech by Northup in Streetsville/Mississauga in 1857. For unreported reasons, Northup’s lecture was prevented when an angry mob protested in the streets. It was after this abortive appearance that Northup began his involvement with the Underground Railroad, which lasted into the beginning of the American Civil War. Information on Northup’s life after that–including his death–has yet to be found.

Bass died on August 30, 1853, of pneumonia, in the same area of Louisiana where Northup had been a slave. He must have started feeling ill before that, as he had contacted a local attorney, John P. Waddill (who had also played a role in Northup’s formal release from slavery), to have a will drawn up. He related information on his past life to the lawyer, who recorded it in his diary (see Waddill’s diary entry regarding Bass’ death at top).

In the 2013 film, the character of Samuel Bass is portrayed by Brad Pitt. The film is directed by Steve McQueen.