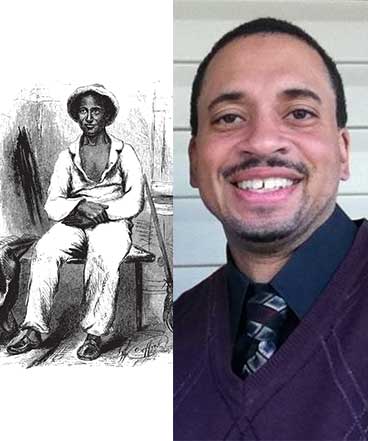 My name is Clayton Jamie Adams. I am the great-great-great grandson of Solomon Northup on my mother’s side of the family. My first experience of Solomon was during the later years of my high schooling while growing up in Syracuse, NY. My mother, Carol Adams-Sally (maiden name Linzy), was an avid reader. One day while gazing through her library of books, I came across Puttin’ On Ole Massa,’ which is a trilogy of slave narratives of Henry Bibbs, William Wells Brown, and Solomon Northup. Not inquiring into the particulars of this book, I simply read it, and then replaced it in her library. I graduated from high school in 1988. In college I took a course in Black History and Black Literature. Here is where I came across the name of Solomon Northup again, which was briefly mentioned. I remembered the name from the book my mother had, and then I inquired more as to her finding of this book (mentioned above). It was then that my mother informed me of my great ancestral heritage bestowed onto me. This was in 1990, and ever since then I was more prone to inquire of my ancestry. In her words, my mother has stated, “I have been aware of my great-great grandfather’s story since high school. My mother, Victoria Northup Linzy Dunham, Alonzo Northup’s granddaughter, gave me and my brothers and sisters copies of Twelve Years A Slave facsimiled from the 1st edition at an early age. But like many young people I did not pay attention to family history. Later on, I regrettably lost the book. I was told that, handed down from generation to generation, my Grandma Victoria had an original 1st edition book of Twelve Years A Slave. Narrative Of Solomon Northup, A Citizen Of New-York, Kidnapped In Washington City In 1841 And Rescued In 1853, From A Cotton Plantation Near The Red River In Louisiana“. (This was the original 1853 title of the book.)

In discovering this part of my ancestry I made a promise to myself that my children will be taught of this lost family legacy. I searched for the book Twelve Years A Slave, and thankfully there was a republished edition made possible by Dr. Sue Eakin. Immediately after reading the book, with tears still flowing from my eyes, I began to write. I took Creative Writing and Poetry in college, but never really had a passion to write poetry until after reading Solomon’s book. I wrote my first official poem with Solomon Northup in mind. I truly felt the spirit of Solomon, and the spirit of my ancestry was awakened within my soul. I dedicated my first poem to Solomon Northup and would like to share it with you. It is entitled “As Yet Untitled” because I still wasn’t sure how to come up with titles to poetry, and I have never changed it since.

I became more “ascertainable” of my personal family history and where I came from. I have spoken with my grandmother, Victoria Northup Linzy Dunham, with every opportunity I had to learn about her life, trials and tribulations. She was born in 1909. I have also asked my mother about her childhood. I believe the children of today don’t show an interest in the life of their parents or grandparents. Not in a negative way, but maybe simply in a viewpoint of oddness in thinking their parents or grandparents were ever children first.

After the birth of my first child (Nia Imani Adams) in 1990, I did not want this lack of knowledge about her heritage to occur with her. So I held true to my promise of making sure she knew not only Solomon Northup and her ancestry, but of me as well. When Nia was three years old, we moved from Syracuse, NY to Pittsburgh, PA, where I still reside. When she got a little older, I purchased the children’s version of Twelve Years A Slave, also published by Dr. Sue Eakin. So when she was in high school and studying the American history of slavery, Solomon Northup was in her history book. She knew, unlike me in college, who he was, and how he was related to her, and just having that knowledge of self and heritage was an uplifting experience for her. I also have made sure that through the years since, whenever we visited my hometown, I showed her the different neighborhoods where her father grew up, as well as the different schools I attended. And in the summers as she was growing up, she spent the time with her grandmother (my mother), and I encouraged her to ask questions.

Early in 1999 my mother came across a newspaper story about Solomon Northup at Union College in Schenectady, NY. There Professor Dr. Clifford Brown was putting on an exhibit and didn’t even know that there were descendants still living in the Central New York area. My mother contacted him and was invited to partake in the event, where she read passages from the book. By July in the same year, with the diligence of Renee Moore, “Solomon Northup: A Celebration of Freedom Day” was created to honor Solomon in his hometown of Saratoga Springs, NY. Several years later Mayor Ken Klotz proclaimed the event to be a permanent annual celebration.

My mother, Carol, states that “these annual events enabled our family to reconnect to its past, and to appreciate the importance of the Solomon Northup story.” The birth of my second child (Charysma Joi Adams) was soon after the 1St Annual Solomon Northup Day event. I made sure that I kept my promise to her as well. Nia handed down the children’s version of Twelve Years A Slave to her younger sister. This is the tradition that Solomon Northup has given me and my entire family– children, cousins, aunts and uncles alike. And as tradition, descendants have come to celebrate at the Solomon Northup Day for the last fifteen years.

My grandmother, Victoria Northup Linzy Dunham, was present at the very first Solomon Northup Day in 1999, as well as over 30 descendants, including myself and daughter (and daughter-to-be). Grandma Victoria flew all the way from Los Angeles, CA. She is the daughter of Henry, who is the son of Alonzo, who is the son of Solomon, who is the son of Mintus Northup. Mintus was a slave who was set free in 1797 after the death of his slave master Captain Henry Northup, in accordance with Captain Henry’s final will and testament. This freedom enabled Solomon to be born as a free black man. When asked about her awareness of Solomon Northup, my grandmother was quoted as saying, “Nobody ever said much about him when I was growing up. As I got older, I had more questions, and we are still finding out things.” Fifteen years later, this is still true. But thanks to Grandma Victoria and her being “ascertainable,” countless of generations do know their history and where they come from. Unfortunately, my grandma passed away in 2007 before the 2008 bicentennial celebration of the birth of Solomon Northup, but her spirit lives on at every event. At the 2008 Solomon Northup Day, event there was a gigantic birthday cake, and written on it was “Happy 200th Birthday.” We had the youngest family members of Solomon’s descendants blow out the birthday candles.

In 2013 my daughter (Nia) was vacationing in New Orleans, LA, so I asked her to see if she could find an original 1853-54 edition of Twelve Years A Slave. After visiting a research center and searching through four antique book stores, Nia was able to find an original rebounded copy. At this year’s 15th Annual Solomon Northup Day, I felt an overwhelming joy in presenting my mother with the original copy of the book that was lost to her for many decades.

Solomon Northup has been an inspiration to me during my life’s trials and tribulations. And my mother couldn’t have said it any better by stating, “His courage and perseverance should be an inspiration to all humans who face life’s obstacles and tragedies. We are all proud of him and Anne and hope that others will benefit from knowing his story.”

There are times when I feel as if the whole world is my foe.
They surround me in the ‘Desert of Survival’ leaving me nowhere to go.

Without a backbone I jellyfish my way through life.
Or I can be proud of something I know nothing of
And youthfully die.

Knowledge is LIFE and ignorance is DEATH.
If you have insight
Spread the truth.
If you are puzzled
Be Ascertainable.

{Through the Spiritual Enlightenment of my great-great-great grandfather Solomon Northup to whom I dedicate this poem; My First Poem “AS YET UNTITLED”} –Copyright 1992