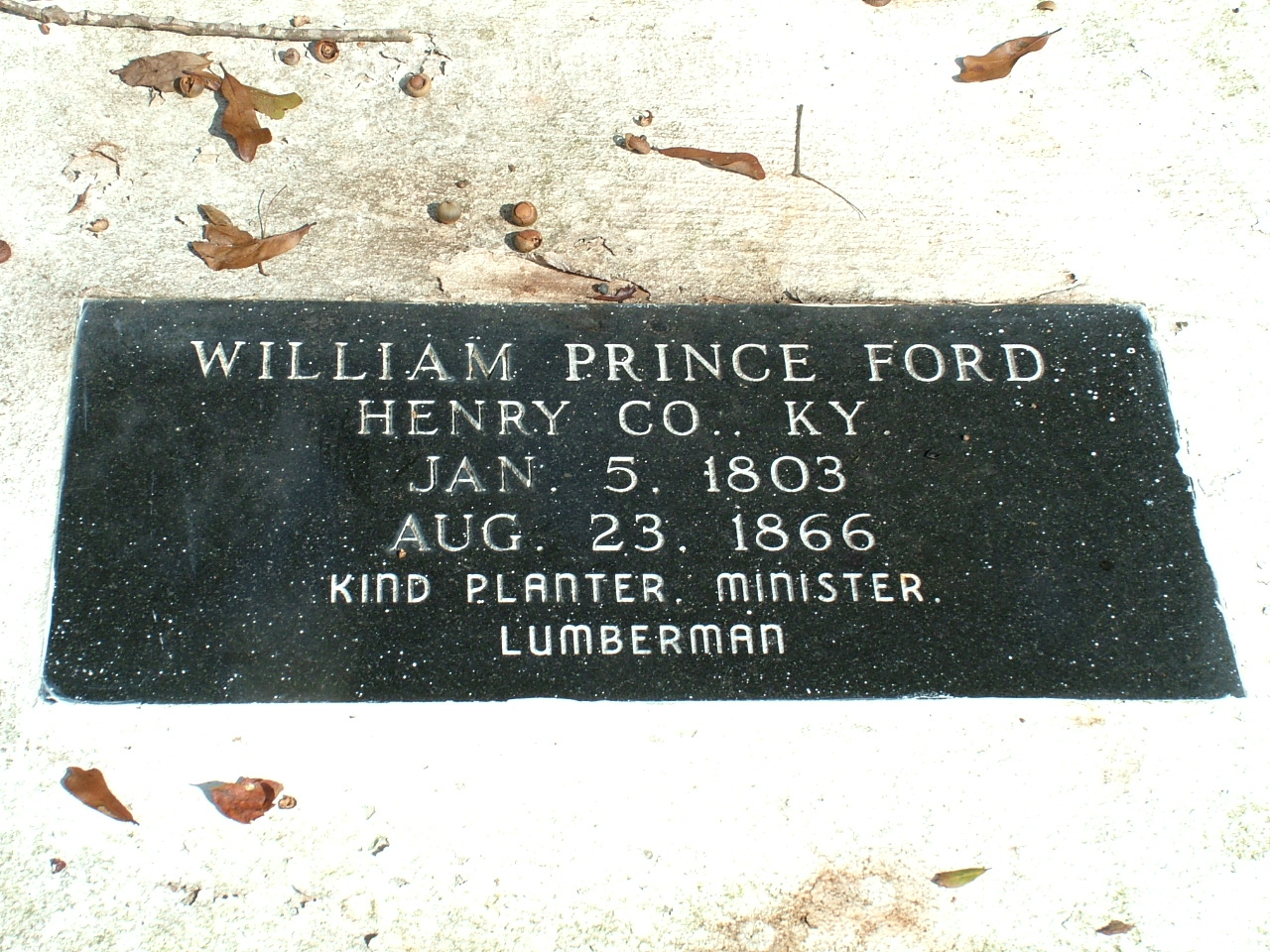 The Ford family has a strong pride in their lineage and the character passed down through men like William Prince Ford. In his narrative Twelve Years a Slave, Solomon Northup said, “there never was a more kind, noble, candid, Christian man than William Ford.” This William Ford was William Prince Ford, a planter, sawmill operator and religious leader in the Cheneyville area of Avoyelles and Rapides parishes in Louisiana, and my third great grandfather through my father, William Marcus Ford. My father was born in Cheneyville in a house on Ford Street, and his first cousin, William Henry Ford, lives on the same street to this day.

William Prince Ford was born in Kentucky in 1803 and came to Louisiana in 1816 with his family. He married Martha Providence Tanner, daughter of a prominent family in the area. Martha and William had five children together before Martha died in 1849. William then married Mary Boaz Dawson, and they had no children together. My family’s lineage is through the fifth child of the first marriage, Walter Prince Ford.

The schism in the Cheneyville church was part of a larger Restoration movement sweeping the United States at the time, which called for a more primitive form of Christianity, disavowing traditions not found directly through Scriptures. Though labeled as “Campbellite” in the following excerpt, reformers disavowed such labels and preferred to be called “Christian.” Among other modern denominations derived from this movement are the Churches of Christ.

I found a somewhat detailed account of the particular disagreement in the Cheneyville church in “Three Pioneer Rapides Families: A Genealogy,” which excerpts a direct account by Paul Jabez Tanner, William Ford’s brother-in-law. Tanner and fellow church members were reading the Articles of Faith of the Baptist Church in August 1841 and questioned the following article: “We believe in the eternal unconditional election of a definite number of the human family to grace and glory.” After some deliberation, a group of members of the Cheneyville church determined that if they were to accept that article, there would be “no further use for the Bible.” According to Tanner, this particular Article of Faith was a point of contention to other churches in Louisiana at the time.

The Cheneyville church later hosted a “preacher named McCall,” who gave a reform-minded sermon on “spiritual influence.” After McCall’s sermon, an elder complained that “if what he had just heard was the truth, he had been preaching error for twenty years.” Another elder supported McCall’s beliefs and commenced to preach “a severe sermon against the old way of doing business.” The traditionalists then labeled the reformers “Campbellites,” though, according to Tanner, “I do not suppose there was an individual in the neighborhood who knew Mr. Campbell or the tenets he taught.”

Simply put, a large group of members of the Cheneyville church rejected the Baptist Articles of Faith, because they believed “Baptists had no creed but the Bible.” After much attempt by the reformers to amend the Articles and reconcile their differences, Tanner was “determined to withdraw, but, by persuasion of W. P. Ford, was induced to hold on” until a meeting was held to bring peace to the situation. After several attempts to reconcile, the issue was not settled, and the reformers withdrew from the Cheneyville Baptist Church and eventually established their own Christian Church in May 1842.

William Prince Ford appears in the affairs of Tanner’s new Christian Church, when in 1845, his own Springhill Baptist Church charged him “1st, with having administered the Lord’s Supper to the Campbellite church at Cheneyville; 2nd, with having ordained elders in said church; 3rd with having thus given countenance to the schism in the Cheneyville Baptist Church. Upon the investigation of these charges he was expelled from the Springhill church, March 16, 1845.”

I enjoy learning from this incident that William was not afraid to question convention and to rebel against what he found wrong, though it would seem he did so with careful deliberation and with the intent to resolve the differences between the reformers and the traditionalists. I think this cautious and thoughtful ability to question authority was passed down to current generations!

Regarding Solomon’s story, we who descend from those who held human beings in bondage are left with a bit of a conundrum – knowing that your family participated in America’s greatest shame, yet being proud of where you come from. I find it comforting to know that William Ford treated Solomon Northup with kindness, even as he kept him in enslavement. Even though William could never know that he would be part of such a compelling life story, his character was defended by the victim who had all the reason in the world to hate him.

I’ve long felt that Solomon’s story was deserving of being told on a larger stage, and Benedict Cumberbatch has now brought my great-great-great grandfather to life on the screen. The fact that Solomon recorded his story is vital as we move farther and farther from slavery and overt racism, because no matter how far we’’ve come, America continues to struggle with race issues. I think of an e-mail exchange between my sister Laura and a descendant of Solomon, Joseph M. Linzay, Sr., in which Mr. Linzay addresses Laura’s concern that her ancestor owned his: “Although your grandfather was a slave owner, he was kind to Grandfather Solomon…I blame slavery on ignorance and illiteracy…For this reason, all of my descendants are college graduates.” We cannot solve our problems unless we understand the past that we’ve come from. Additionally, I’m very thankful that this film comes at a time that I can share it with my own children when they are old enough to appreciate the history and their heritage within the story.